This coming Wednesday night on MnRTV Live Show we take a look at the dreaded Four Horseman of the Apocalypse! The four horsemen of the Apocalypse are described in Revelation chapter 6, verses 1-8. The four horsemen are symbolic descriptions of different events which will take place in the end times. The first horseman of the Apocalypse is mentioned in Revelation 6:2: “I looked, and there before me was a white horse! Its rider held a bow, and he was given a crown, and he rode out as a conqueror bent on conquest. This first horseman likely refers to the Antichrist, who will be given authority and will conquer all who oppose him! The second horseman of the Apocalypse appears in Revelation 6:4, “Then another horse came out, a fiery red one. Its rider was given power to take peace from the earth and to make men slay each other. To him was given a large sword.” The second horseman refers to terrible warfare that will break out in the end times. The third horseman is described in Revelation 6:5-6, “...and there before me was a black horse! Its rider was holding a pair of scales in his hand. Then I heard what sounded like a voice among the four living creatures, saying, ‘A quart of wheat for a day's wages, and three quarts of barley for a day's wages, The fourth horseman is mentioned inRevelation 6:8, “I looked, and there before me was a pale horse! Its rider was named Death, and Hades was following close behind him. They were given power over a fourth of the earth to kill by sword, famine and plague, and by the wild beasts of the earth You will not want to miss this show on the Four Horseman of the Apocalypse!! Youtube link will be up 15 min before the show! Tune in this Wednesday if you can at 7:30pm Eastern time, that’s 4:30pm Pacific for another MnRTV live show also feel free to have your say on the chat. We now have a Question Period and please feel free to send and questions that you may have to Mario or Robert at this email address mnrtvliveshow@hotmail.com 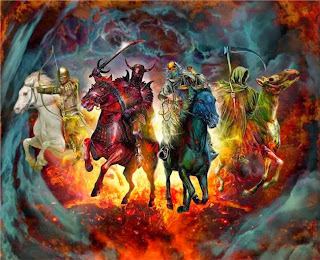 Posted by Mario Info Madman Laurier at 10:01 PM No comments: