This Wed night for the start of the year 2017 we have special guest author and researcher Donald Zygutis as we look into the Sagan Conspiracy Mainstream SETI scientists and ancient alien theorists don’t agree on much, but one opinion they share is that the undisputed authority on the possibility of alien existence was the late Carl Sagan (1934—1996), whose voluminous writings on the subject have had a profound influence on ETI research. But how many Carl Sagan fans know that while the renowned scientist was at Stanford University, he produced a controversial paper, funded by a NASA research grant, that concludes ancient alien intervention may have sparked human civilization? Author Donald Zygutis lays out a compelling case that points to a cover-up by the Pentagon and NASA, who may have buried it soon after it was written. How significant is the Stanford Paper? The answer may lie in another question: How would a science-backed theory and search strategy to guide the discovery of alien artifacts among our own ancient civilizations impact the worldwide institutions of government, religion, and culture? Recently rediscovered by the author, Sagan’s lost Stanford paper is the central theme of The Sagan Conspiracy. Groundbreaking research and paradigm-changing material challenges conventional thinking about the People’s Scientist—and maybe even the origins of human society. Sagan even conceived of the likelihood that the ancient Sumerian civilization had been visited and influenced by beings from other worlds as evidenced by ancient manuscripts, among other artifacts. WE will look into this and much more on MnRTV Live Show His website is http://thesaganconspiracy.com/ 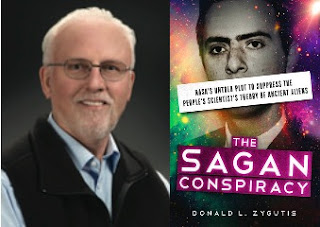 Posted by Mario Info Madman Laurier at 7:19 PM No comments: