This week on MnRTV Live show we have special guest J.R. Watts as we investigate The Bible codes and the Shroud of Turin. The Archangel Gabriel pointed to the unsealing of hidden prophecies in the Bible, which would signal the end of days when he told the prophet Daniel that in the last days, many will run to & fro and knowledge shall be increased, as we are now witnessing in the Information Age & it's endless availability of online data. Gabriel was obviously referring to what we now know as the Bible or Torah Codes The Bible code cannot be explained away by skeptics. How could codes about futuristic events that would take place thousands of years after they were written in the Bible... occur?" he questioned. The biblical authors could not have known what would happen in the future, he added, suggesting the Bible codes were authored by God. These codes, many found in the first five books of the Old Testament (Torah), can be decrypted with special software, Watts explained. Within the plain text of the Bible is a cipher text which contains specific detailed information about the future that cannot be coincidental, he continued. As examples, he cited the assassinations of Abraham Lincoln, and Robert and John Kennedy, as well as the 9/11 attack on New York. Watts expressed his belief that 9/11 was God's judgement on the city for a massive display of calf idolatry during the new millennium celebrations. In addition, Watts thinks there are codes in the New Testament that contain specific words referencing the Shroud, and that the relic was kept safe throughout the ages by an underground Shroud railroad of believers. Can there be hidden codes in the bible that pertain to today? Join us this Wed night as we find out. His website is http://www.shroudcodes.com/ Join us this Wed night on MnRTV Live Show The link for the show will be up 15 minutes before the show! Tune in this Wednesday if you can at 7:30pm Eastern time, that’s 4:30pm Pacific for another MnRTV live show also feel free to have your say on the chat. We now have a Question Period and please feel free to send and questions that you may have to Mario and Robert at this email address mnrtvliveshow@hotmail.com #‎MnRTVliveshow‬ ‪#weare‎theresistance 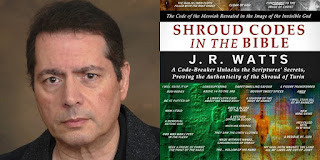 Posted by Unknown at 9:22 PM No comments: