This Wed night on MnRTV Live Show we investigate the Bohemain Grove- Meeting of the Illuminati Death Cult! What is this about. In mid-July each year, Bohemian Grove hosts a two-week encampment of some of the most powerful men in the world. The Bohemian Club’s all-male membership includes government leaders, even royalty such as the King of Sweden, Carl XVI Gustaf and many former U.S. presidents, such as Herbert Hoover, Eisenhower, Nixon, Ford, Reagan and both George Bush Sr. and Jr., government officials such as Robert F. Kennedy, Colin Powell and Donald Rumsfeld Henry Kissinger, movie and music celebrities such as Arnold Schwarzenegger and Jimmie Buffet, senior media executives including Rupert Murdoch, CEO of News Corporation and the management of Time Warner, as well as many prominent business leaders, such as the Rockefeller and Rothschild banking family dynasties. Members may invite guests to the Grove although those guests are subject to a screening procedure They do mock sacrifices to an ancient evil false god called Molech Recent information may radically change this perception of Bohemian Grove. Not merely drunkenness, unbounded use of alcohol and drugs with vague homosexual tones (confirmed by our sources) but reported activities much more serious - kidnapping, rape, paedophilia, sodomy, ritual murder. Investigation is blocked under the 1947 National Security Act.(!) and like the Omaha child abuse case, includes illegal detention of children. Join is this Wed night at 730 est Youtube link will be up 15 min before the show! Tune in this Wednesday if you can at 7:30pm Eastern time, that’s 4:30pm Pacific for another MnRTV live show also feel free to have your say on the chat. We now have a Question Period and please feel free to send and questions that you may have to Mario or Robert at this email address mnrtvliveshow@hotmail.com 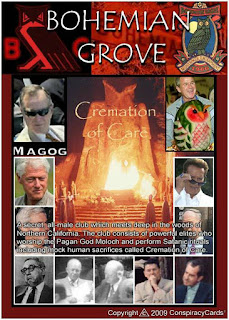 Popular picture of the week

Posted by Unknown at 6:35 PM No comments: