This Wed night we have a great guest author and researcher Will Champion as we investigate with him UFOS, Aliens & The New World Order Connection! He will discuss about the state of our current affairs from a unique perspective involving shocking connections between UFOs, otherworldly beings, and the unelected shadow government behind the New World Order. Champion will also talk  about growing up in Roswell, New Mexico, where "a whole circle of people... told [him] some stories that just seemed at the time too fantastic to be true and yet they absolutely were." It was in Roswell where Champion met a mortician who confirmed wreckage and small bodies were found in 1947 and brought to the base hospital, where the mortician's girlfriend worked as a nurse. Her description of the bodies matches what we've come to understand are grey aliens! Champion will outline details of a war between the corporate government and the people. The weapon of choice used against the people is codified law, Champion explained, tracing it to the Code of Hammurabi which he suggested may have had extraterrestrial origins. According to Champion, in its ancient past Earth was visited by otherworldly beings who ultimately fathered "a secret society of ruthless merchant bankers and big businessmen totally against humanity and bent on complete world domination." Their goal is to abolish the sovereignty of all nations and establish one centralized New World Order to rule over all! All this and much more on the MnRTV Live Show! His website is http://www.willchampion.com/ Join us this Wed night on MnRTV Live Show The link for the show will be up 15 minutes before the show! Tune in this Wednesday if you can at 7:30pm Eastern time, that’s 4:30pm Pacific for another MnRTV live show also feel free to have your say on the chat. We now have a Question Period and please feel free to send and questions that you may have to Mario and Robert at this email address mnrtvliveshow@hotmail.com #‎MnRTVliveshow‬ ‪#weare‎theresistance 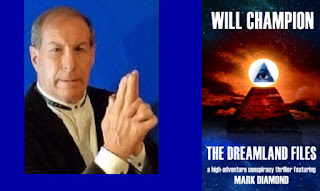 Posted by Mario Info Madman Laurier at 7:27 PM No comments: