Using newly declassified and Freedom of Information Act documents, eyewitness accounts, interviews, and leaked documents being authenticated, THE PRESIDENTS AND UFOS details the secret history of UFOs and the corresponding presidential administration. Starting in 1941 with the Roosevelt administration, author Larry Holcombe examines the startling discoveries facing a president preoccupied by WWII, the explosion of UFO sightings during the Truman years, first contact during the Eisenhower administration, and the possibility of a UFO connection to the Kennedy assassination. In 1975, the Nixon administration came very close to admitting that UFOs exist by funding a documentary by Robert Emenegger. Almost 40 years later, this book will examine Emenegger's findings. For the first time, the involvement of all of the modern presidents up to and including President Obama, and the rise and then fall of their influence on UFO issues, are told in one story that is an integral part of the fascinating UFO tapestry.You will not want to miss this weeks show. His website is http://www.larryholcombe.com/ Join us this Wed night on MnRTV Live Show The link for the show will be up 15 minutes before the show! Tune in this Wednesday if you can at 7:30pm Eastern time, that’s 4:30pm Pacific for another MnRTV live show also feel free to have your say on the chat. We now have a Question Period and please feel free to send and questions that you may have to Mario and Robert at this email address mnrtvliveshow@hotmail.com ‪#‎MnRTVliveshow‬ ‪#‎resistance 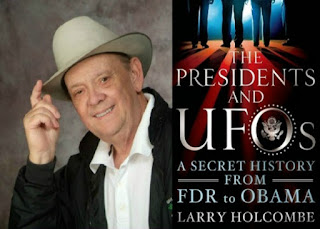 Posted by Unknown at 7:41 PM No comments: