This Wed night at 730 we take a look at a growing trend the Global Police State rising. Police state is a term denoting government that exercises power arbitrarily through the police. Originally the term designated a state regulated by a civil administration, but since the beginning of the 20th century, the term has "taken on the emotional and derogatory meaning. In the end times it is stated that a new world order headed by the Antichrist is coming so its the police state part of it? We see more and more cameras and surveillance bug brother and police forces that are being militarized and armed to the teeth. They are brutal in Canada and especially in the United States . To some persons who cannot see what's happening to America and the world at the present time, it seems ridiculous to say that the U.S. is a police state. "Where are the jack-boot Nazi Gestapo thugs breaking down doors and hauling people off to death camps? Where are the SS thugs brutalizing women and children? The conditions in America do not have to be identical to Nazi Germany in the 1930s and 1940s for America to be a police state and a fascist dictatorship! If we examine the essence of a police state--destruction of Constitutional rights, genocidal murder of the working class by capitalist predators, deliberate criminal acts by government officials--then America in the twenty-first century is unquestionably a police state! Youtube link will be up 15 min before the show! Tune in this Wednesday if you can at 7:30pm Eastern time, that’s 4:30pm Pacific for another MnRTV live show also feel free to have your say on the chat. We now have a Question Period and please feel free to send and questions that you may have to Mario or Robert at this email address mnrtvliveshow@hotmail.com 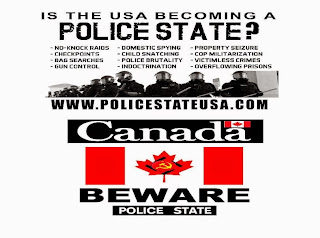 Posted by Unknown at 7:14 PM No comments: