Does a mystery that is 3,500 years old hold the key to what is going to happen to global financial markets in 2015? Could it be possible that the timing of major financial crashes is not just a matter of coincidence? What is “the Shemitah”? In the Bible, the people of Israel were commanded to let the land lie fallow every seven years. There would be no sowing and no reaping, and this is something that God took very seriously. In fact, the failure to observe these Sabbath years was one of the main reasons cited in the Scriptures for why the Jewish people were exiled to Babylon in 586 BC. The Sabbath year (shmita Hebrew: שמיטה‎, literally "release") also called the sabbatical year or sheviit (Hebrew:שביעית‎, literally "seventh") is the seventh year of the seven-year agricultural cycle mandated by the Torah for the Land of Israel,[1] and still observed in contemporary Judaism. Wall Street analysts have pondered the mystery of what appears to be seven-year economic cycles. They’ve also wondered why crashes seem to come in September.Jonathan Cahn, author of the mega-best selling book “The Harbinger,” thinks he has figured it out. In his sequel, called of “The Mystery of the Shemitah,” the messianic rabbi reveals the shocking discovery that the five great economic crashes of the last 40 years – 1973, 1980, 1987, 2001 and 2008 – have all occurred in Shemitah years – those God set apart as Sabbath years.Is this possible that this year on Sept 13 the economy will fall? This is a very interesting prophecy that we will investigate. Join is this Wed night at 730 est Youtube link will be up 15 min before the show! Tune in this Wednesday if you can at 7:30pm Eastern time, that’s 4:30pm Pacific for another MnRTV live show also feel free to have your say on the chat. We now have a Question Period and please feel free to send and questions that you may have to Mario or Robert at this email address mnrtvliveshow@hotmail.com 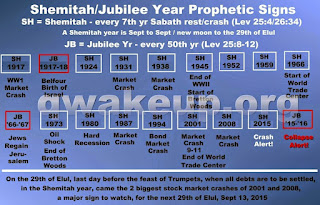 Posted by Mario Info Madman Laurier at 1:59 PM No comments: