This Wed night on MnRTV we will investigate the Illuminati card game. Steve Jackson created these cards and in one of those cards there is a card called terrorist nuke. Did this predict 911? What about all the other cards such as oil spill or world war3 new world order? September 1981, Steve Jackson and his regular freelance cover artist Dave Martin discussed their shared admiration of the Illuminatus! Trilogy, and the latter suggested a game. Steve Jackson decided against adapting the novel because of the expense of game rights, and the difficulty of adapting a novel with such convoluted plots. He decided "a game about the secret-conspiracy idea behind Illuminatus!" was doable. After doing research on the Illuminati and conspiracy theories, and "extensive and enthusiastic playtesting" it went on the market in July 1982 in the Pocket Box format (a plastic box the size of a mass-market paperback) which was at the time the usual for SJG. Over the next few years, three expansions for the Pocket Box Illuminati game were published-the first two were substantially incorporated into the deluxe edition, while the third was an earlier version of what would become Illuminati: Brainwash. Is this a game or a game based on reality to come? Find out only on MnRTV Live Show this Wed night! Youtube link will be up 15 min before the show! Tune in this Wednesday if you can at 7:30pm Eastern time, that’s 4:30pm Pacific for another MnRTV live show also feel free to have your say on the chat. We now have a Question Period and please feel free to send and questions that you may have to Mario or Robert at this email address mnrtvliveshow@hotmail.com 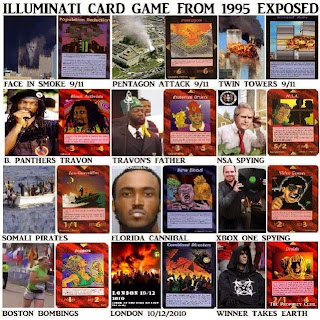 Popular pictures of the week.

Posted by Mario Info Madman Laurier at 6:35 PM No comments: